On 12 June, the kick-off event of the major international EU project "LIFE BOVAR" was held under the auspices of NABU Lower Saxony. Minister of the Environment Lies gave the official "starting signal" at the event in the Bernsen quarry, district of Schaumburg. 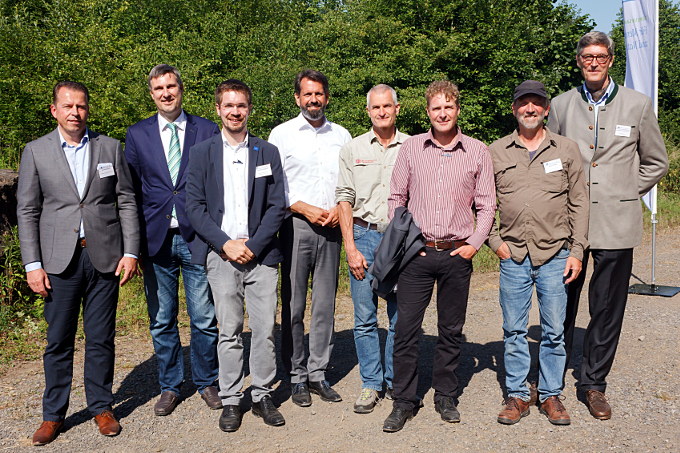 12. June 2018 - Since the beginning of March 2018, NABU Lower Saxony - together with its project and cooperation partners - has dedicated itself to the "management of the yellow-bellied toad and other endangered amphibian species of dynamic habitats" in the internationally active species conservation project with the short title "LIFE BOVAR". The target species yellow-bellied toad, midwife toad, natterjack toad and crested newt are to benefit above all in Natura 2000 protected areas. The European Union supports the project with funds from the EU Environmental Programme for Nature and Biodiversity.

Together with the project partners from the Netherlands (Stichting IKL), the Hildesheim School Biology Centre, the Soest Working Group on Biological Environmental Protection, the NABU Nature Conservation Station Aachen, the Ministries of the Environment of Lower Saxony and North Rhine-Westphalia, project actions and species protection measures will be carried out over a period of eight years in order to make a contribution to biological diversity.

"With this project, we want to implement species protection measures and improve the biotope network through the installation of stepping stones," explains Dr. Holger Buschmann, NABU regional chairman of the project. "A particular focus is on the midwife toad, whose population situation in Lower Saxony is currently relatively unclear. We assume strong declines. The project region in Lower Saxony covers eleven districts in southeast Lower Saxony as well as project areas in the adjacent circle Minden Luebbecke in North Rhine-Westphalia and thus the entire distribution area of yellow bellied toad and midwife toad in Lower Saxony. "We would like to take this opening event to the cause, in order to solemnly ring in the project together with project partners, project promoters, co-operation partners, honorary active ones and interested ones", said Dr. Buschmann.

Through the eight-year support of the EU and the co-financing of the states of Lower Saxony, North Rhine-Westphalia, the Bingo Environmental Foundation and many participating cities and districts, NABU Niedersachsen can carry out the ambitious amphibian conservation project.

Accompanying species also benefit from the project
"The LIFE BOVAR project shows that amphibian conservation does not stop at national borders," emphasised Lower Saxony's Environment Minister Olaf Lies. "The project links the habitats for the amphibians with each other and thus provides the animals with greater opportunities for movement. The aim is to increase the radius of action and to permanently secure and increase the populations. To achieve this, many different actors are pulling together. Here in the Bernsen quarry, raw material extraction and nature conservation are not mutually exclusive. That's a fine thing for nature conservation."

"I am glad about the continuity and the cooperation with NABU in species protection here in the district," said Jörg Farr, district administrator of the Schaumburg district. "We want to further promote the conservation of biological diversity and contribute to creating a network of suitable habitats for endangered amphibian species," Farr continued.

"The four target species of the LIFE project will promote the entire diversity of species in the project areas," explained Christian Höppner, project manager of NABU Lower Saxony. "Their habitats and the species protection measures that the project will initiate will also create habitats for many accompanying species. The watercourse facility will make biotopes more productive and thus richer in species, as the entire food web will benefit," Höppner added, formulating further objectives for the project work.

During the subsequent excursion through the Bernsen quarry, the current amphibian biotopes and areas for water facilities were shown, which are to be managed to protect the local populations. Here the Lower Saxony State Forests as owners, the Norddeutsche Naturstein GmbH as tenant and the NABU Lower Saxony work together for the diversity of species.

The Bernsen quarry
The Bernsen quarry is a mining site of Norddeutsche Naturstein GmbH in the Weser Mountains. Kalkoolith is mined here by Norddeutsch Naturstein GmbH on an area of the Lower Saxony state forests. Within the framework of the preceding BfN-funded yellow-bellied toad project of NABU Niedersachsen, species protection measures have been regularly implemented since 2012 in the form of the creation of micro-waters. In the following years, the yellow-bellied toad was reintroduced. This enabled the species to regain a habitat here in the Weser Mountains. In addition to other amphibian species, the common toad is another target species of the new LIFE project in the Bernsen quarry.

Here, you will find an overview of the services awarded by invitation to tender.